Introduction to Cannabis: Anatomy of a Plant

Cannabis is a complicated and beautiful flowering plant, with a variety of types and strains. Indigenous to central Asia and the Indian subcontinent, cannabis has long been cultivated for its medicinal benefits and recreational effects, as well as for hemp fibres and oils. 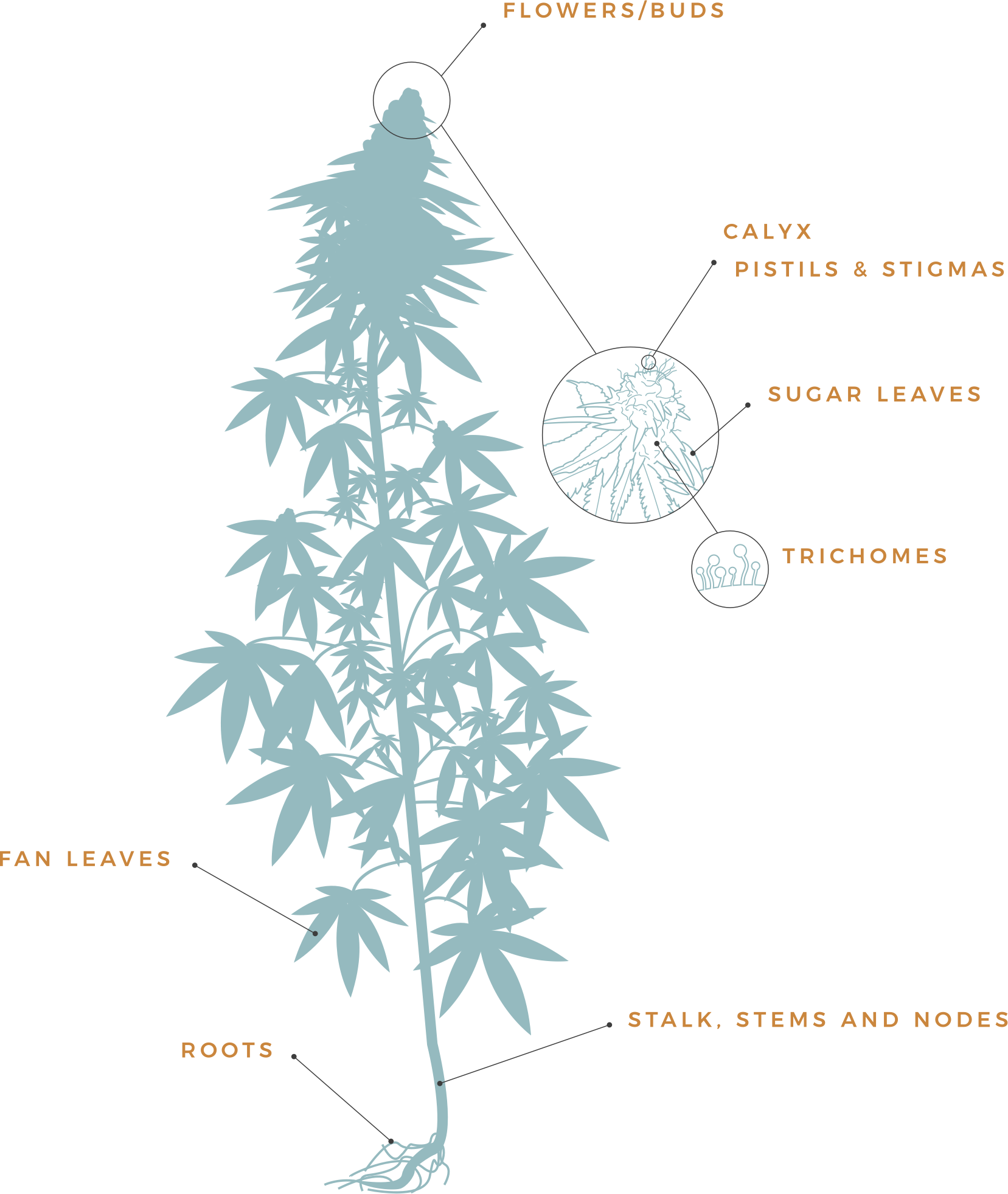 The stalk and stems carry water and nutrients drawn by the roots to the rest of the plant. A cannabis plant's stems contain few cannabinoids. New stem offshoots are called nodes. The nodes can be used to tell the plant's sex, temperature needs and whether it's ready for pruning.

Cannabis plants have roots in the soil that keep it anchored in place. The large taproot and fibrous secondary roots absorb water and nutrients, transporting them to the stalk for distribution throughout the plant.

Pistils are how female cannabis plants reproduce. Stigmas are hair-like extensions from the tip of the pistil that are white in early flower, but turn amber or orange as the plant matures. Preventing pollination increases trichome production and improves the medicinal quality of the flower.

Trichomes are the small resin glands that coat the flowers. These crystal-like structures are responsible for all cannabinoid and terpene production of a plant throughout its life cycle and determine the strain's effects and flavour profile after harvest.

The calyx covers the ovary at the base of the pistil, providing protection and forming the structural base of the flower. In combination with the pistil and trichomes, the calyx contains the highest percentage of THC and other cannabinoids.

The dried flowers or "buds" of the female plant are what you would normally inhale or ingest when consuming cannabis. Flowers are composed of pistils, calyxes, trichomes and sugar leaves. The point where these buds come together at the end of the stem is called the "terminal bud" or the "cola."

The five-point fan leaf (or seven or nine) has come to define the look of the cannabis plant. These distinctive leaves are essential to photosynthesis and growing strong, healthy plants. Unlike the flower, fan leaves contain low concentrations of cannabinoids and aren't usually smoked or vapourized, but they can be used to produce cannabis extracts.

Substantially smaller than the fan leaves, sugar leaves are contained within the flower near the calyx and pistils, and are coated in trichomes. Named for their sparkling appearance, the sugar leaves may be left on the flower after harvest, or trimmed off and used for extracts.