How to Manage the Munchies

Are the munchies a price we must pay for the benefits of our cannabis? With illuminating science on cannabinoids and terpenes, plus behavioural strategies from cannabis experts, we can learn how to stay in control while getting the relief we need.

In the last decade, science has revealed the exciting potential of cannabis therapy. We’ve learned that compounds in the plant can reduce anxiety1, pain2 and inflammation3, improve sleep4 and appetite5, and provide healing and protection to nerves6. With all these properties, today’s bud helps a huge number of Canadians maintain their health and quality of life. According to Statistics Canada, over 1,000,000 people reported that they used cannabis for medical reasons in the fourth quarter of 2018.

Although the benefits are impressive, one well-known effect of cannabis can be a challenge: appetite stimulation. Although it’s an important support for people who are suffering from inadequate nutrition (such as when undergoing cancer treatment or suffering from HIV, AIDS or eating disorders), for most of us, taking in more food and gaining weight isn’t exactly the desired outcome. Is it possible to maintain a healthy diet and weight while using cannabis? With the science around cultivar properties and advice from cannabis educators, we can find out how.

Why Does Cannabis Make Us Eat More?

Research on cannabis and appetite has focused on three areas: the behaviour of seeking rewards, the neural cues of fullness and the pleasant sensory experiences of food. All three of these factors contribute to the “munchie” effect.

In studies on appetite, scientists have found various pathways that influence how much we want to eat and what types of foods we seek. The neural receptors that respond to THC (called CB1 receptors) are numerous in the hypothalamus, which deals with motivation and craving. They think this is why cannabis tends to make us fixate on sweets and fats—the most rewarding or compelling tastes7. CB1 receptors are also numerous in the digestive tract where signals of fullness come from. THC seems to delay or dull these signals, so our brain thinks we’re still hungry even after we’ve polished off a large meat lover’s special8. The last way that cannabis fuels hunger is through sensory enhancement. Studies on appetite have found a connection between food intake and our sensitivity to the sights, smells, tastes, and textures of food. In the elderly, natural dulling of these senses leads to less motivation to eat and less enjoyment when eating, which can result in malnutrition9. By enhancing our awareness of all sensations, cannabis keeps our attention on physical pleasures and can make our favourite snacks hard to ignore.

Learn More: The Science Behind the Munchies

Are the Munchies Inevitable?

Although we know that everyone has CB1 receptors and we understand the general roles they play in our body, the science of cannabinoids is surprisingly complicated. Almost all the effects of cannabis can vary from person to person. In a 2003 study, researchers observed people’s reactions in lab experiments and compared them to their reports about experiences at home. They concluded that not only do the effects of cannabis vary between people, but the same person can have different reactions to the same cannabis at different times10. Appetite was one of the effects that varied widely.

One possible reason why the same dose of cannabis (such as 0.5 grams in your vaporizer) might make you ravenous one day and leave you unstimulated the next is in the chemical profile of the product. Different cultivars of cannabis (i.e., variations of the Cannabis sativa plant that have been bred to display specific characteristics) contain different profiles of cannabinoids and terpenes—active compounds that produce a wide range of effects. Researchers have identified over two hundred of these compounds and are discovering new properties all the time. Several of these molecules seem to be important for controlling our appetite, but they all work differently. For example, while THC (a cannabinoid) tends to stimulate appetite, while humulene (a terpene) appears to decrease it. So typically, a cannabis product with lower THC and a relatively high amount of humulene could be less likely to send you to the pantry with an urgent wish-list.

Learn More: An Introduction to Terpenes

Another factor that affects how much you eat while under the influence is context. Some people try to save their cannabis for the end of the day when they’re in bed with their teeth brushed because they find it less munchifying than when they consume at a party with snacks or alone in the kitchen. 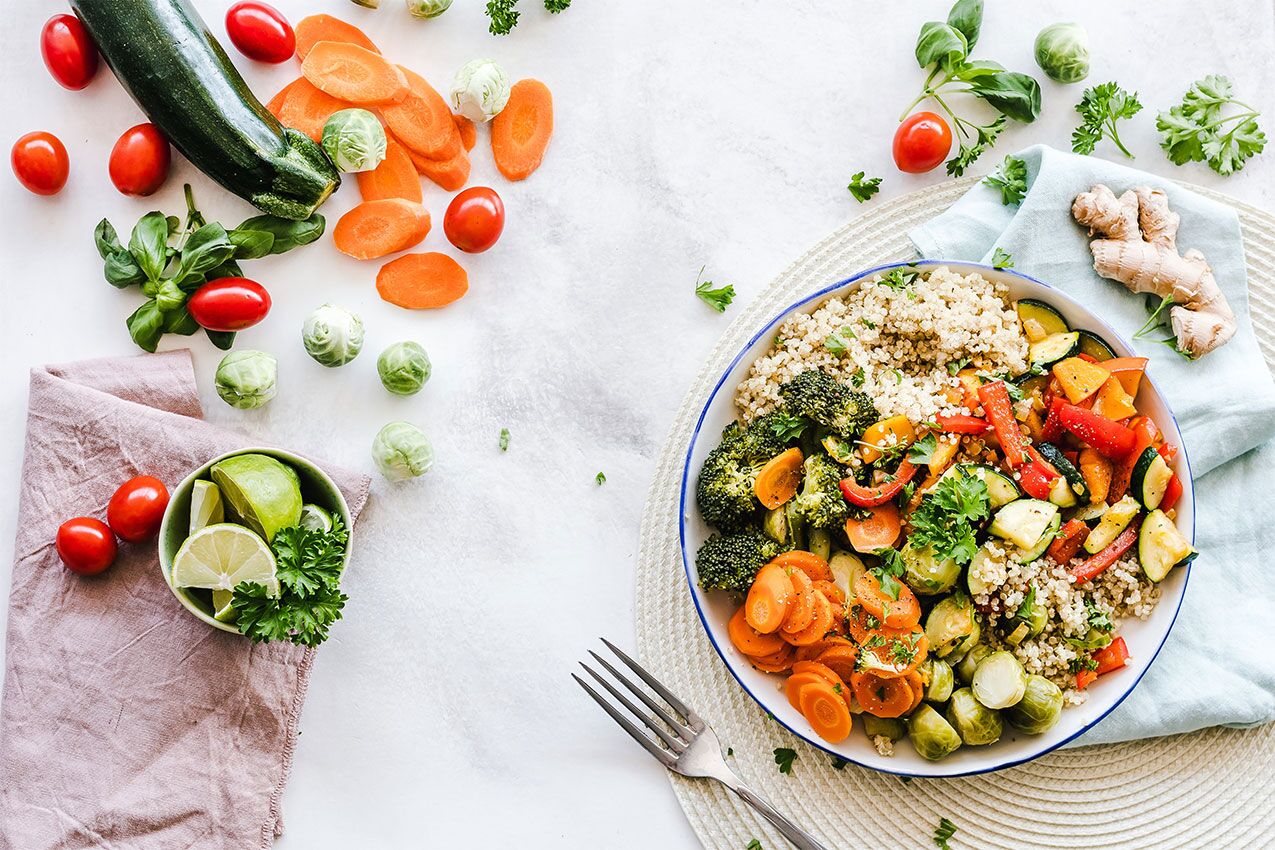 What Do the Professionals Say About Managing the Munchies?

Dr. Jamie Cox, the Chief Medical Officer at Sundial, has managed cannabis prescriptions for over 3,000 patients. In his practice, the munchies weren’t a huge issue.

“Not everyone gets the munchies,” he said. “And among my patients, appetite was a good thing. I saw a lot of people who were undergoing cancer treatment. They were miserable from chemo and suffering from cachexia (weakness and wasting of the body).”

As a general physician, though, he had some advice for people using cannabis and struggling with their appetite. “Don’t have goodies in the house. If you know that burst of appetite is coming, it might make a plate of celery look really good.”

Jill Grindle, the leader of Sundial’s customer service team, is a former cannabis educator. She has discussed munchie management with hundreds of clients, and offered this advice: “First of all, if cannabis is working for you, don’t let worries about your weight turn you off. It’s a myth that cannabis consumers are lazy and do nothing but eat junk.” Numerous studies have found that regular cannabis users actually have a lower BMI than their non-using counterparts11 12 13.

However, if you are struggling with post-consumption eating, Grindle has a collection of tips to help you gain control. “One of the first things I tell people is to eat a snack or meal before consuming your cannabis,” she says. “For some of us, cannabis can make us feel a little shaky or dizzy. Having a bit of food in your stomach beforehand helps prevent that, and then you don’t feel such desperation to eat.”

“The next step is to junk-proof your house. Cannabis is going to make you want to avoid driving or going out, so if there aren’t a bunch of bonbons in the cupboard or ice cream in the freezer, you’ll probably be safe when the munchies hit.”

“One of my favourite tricks is to plan healthy alternatives for the snacks when I’m high. I know that cannabis really enhances my palate, and I’ve figured out that it can make the tastes and textures of healthy foods just as mind-blowing as junky treats. As an example, I crave candy, but if I’ve prepped a fresh orange for myself, I’ll enjoy it. The flavour and sweetness will be to-die-for.”

Grindle’s go-to healthy alternatives for taste and texture cravings are:

She adds that pre-planning portions is also important if you tend to get carried away. “Everyone who’s working on healthy eating knows that deciding and portioning snacks ahead of time is essential.” It’s a comfort when you don’t have to think up and prepare a good choice of snack during a munchie emergency.

Finally, Grindle says that when it comes to choosing cannabis products to manage the munchies, information is power. “Some strains of cannabis are surprisingly strong appetite suppressants. Ones with lots of humulene or THCV tend to work well. Humulene seems to suppress activity in the appetite pathway, and THCV blocks both CB1 and CB2 receptors so that THC can’t stimulate them14, reducing the munchies and the high. THCV is a good compound for people who are looking for effects from cannabis without the high.

She adds that THCV tends to be common in African landrace sativas (old cannabis genetics that developed in the African region). “But there’s a caveat,” she warns. “Those high THCV strains can increase anxiety for some people. So, if that’s a concern, another option is to look for strains with lots of CBD, which blocks the effects of THC in a similar way while also easing anxiety15. CBD-only oils and capsules are another way to get the benefits of cannabis without any munchies at all.”

Knowing that everyone reacts differently to different strains, it’s always a good idea to start low and go slow when you try new products. Keeping a journal of your reactions will also help you figure out what works best for your body and mind.

If you’re worried about your food intake when using cannabis, use these tricks to feel more in control. Learn about how cannabis affects your appetite, choose products that are less hunger-stimulating, and plan your environment so that snacking will do less damage. In the end, remember that the munchies are not an unstoppable force. If you experiment and explore, you can find a way to customize your routines so you can enjoy natural relief without worrying about your weight.

[8] Tibiriça E. The multiple functions of the endocannabinoid system: a focus on the regulation of food intake. Diabetology and metabolic syndrome. 2010;2(1).